Little Red Riding Hood II, a photo by Maria Kristin Steinsson on Flickr.
For today's creative writing prompts, we are going to look at fairy tales.

Free-Write: Invent a new fairy tale by taking an old favorite and mixing it up a bit.   You can change the ending, add characters, or change the plot. Try free-writing for 10 minutes and see where it takes you.

Below are two links to Poets.org The links will take you to poems.  One is "Fairy Tale" by Ron Padgett.  Notice how the poem is all in one stanza, but there are 3 distinctive parts.  One is the description of the elf, the next part is the place where the elf is, and the third part is a short monologue by the elf himself.  What effect do you have when you read the poem?  How do you think the way the writer organized this influences the effect?  Discuss it in your class or reflect on it in your journal entry.  Do writing practice by describing another character that might appear in a fairy tale, then follow it up by place (it can be a place in the present) and then of course, a short little monologue of what your character has to say and what he or she is planning (but don't give us too many details).  Take this as writing practice and feel free to share what you have.

Here is the link that also provides an audio track if teachers would like to play it for the class:

The next link I'm going to give you is a sad poem called "A Fairy Tale" by Jennifer L. Knox.  This is your warning!  It pretty much brought tears to my eyes (pardon the cliche).  You can write a sad, modern day tale or a happy one.  It's up to you.  Below is the link, and don't say I didn't warn you! 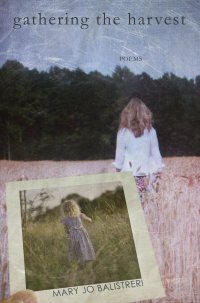 Enjoy this interview below with Mary Jo Balistreri about her new book, Gathering the Harvest.  This interview is part of The Next Big Thing interview project.  Following the interview will be a poem from the book, and your creative writing prompts will follow.

“THE NEXT BIG THING” asks writers to self-interview about their books with 7-8 designated questions, post somewhere in the blog-o-sphere and then “tag” (5) writers for the next week to do the same. Mary Jo Balistreri has been tagged by Karla Huston (www.karlahuston.com)
What is the working title of the book?
Gathering the Harvest

Where did the idea come from for the book?

Originally I thought about a chapbook that dealt with my experience of throat cancer, cellular collapse, and almost death. Not expecting to live, and living fully was something I wanted to share. I sent the manuscript to Tiger’s Eye for a critique which was positive. Before that my writers’ group and a special poet friend encouraged me. I never submitted it. Decided that I wanted to continue writing poems rather

than market them probably because I had thought I’d never write again.

What actors would you choose to play the part of your characters in a  movie rendition?

I’d want Meryl Streep to play the main character. She is interested in art and music as I am, is married to a sculptor, and both of my parents were creative. She plays with emotional depth and courage, and her passion for what she does feels similar. As a model of a strong independent woman, one who loves and lives deeply, she would understand what it is like to be thought dead and live with the consequences of both loss and joy.

What is the one sentence synopsis of your book?

A blurber says it is both an elegy and a quiet celebration—an elegy for a world either lost or never fully realized, but a celebration too, of all that remains, survives and flourishes.

How long did it take you to write the first draft of the manuscript?

The cancer part of the book was begun in 2008, but there are poems much earlier than that as well. I just wrote the poems as they came with no particular idea in mind. When I realized I it was time to take stock of what I had accumulated, and finally do something about it, the idea of a book came back strong. I had published a chapbook in December with none of the poems in this present book. There were more poems that had been published, some which had won awards so I decided on a book. I brought 90 some poems to a friend and advisor and we discussed what the book could look like. She spent time thinking about an arc, sections, etc. and was most encouraging and supportive. I found a way to include some art poems and then at a certain point, my daughter and I spread the poems all over the floor like pieces of a puzzle. The arc of the book presented itself, the title. The cover.

Who or what inspired you to write this book?

Having cancer and its aftermath inspired the book, and the thought that this was a second chance. When I finally left the hospital, I could not even write my name. With the support of all my poet friends, and one in particular who never gave up on me, I slowly came back to writing. I wanted to share that experience knowing there were many people out there who thought they’d never do certain things again—that their life was over. I wanted to show that great loss changes one; life will be different, but it can be lived with richness and even more meaning.  It seemed a great opportunity to convey that. So I had circled back to the original intended chapbook.

What else about your book might pique the reader’s interest?

I’m very happy with the cover art—done by a young graphic designer and poet, Chrys Heidel who lives in Delaware. It shows so well a life moving forward toward harvest, reaping all the world has to offer.

Will your book be self-published or represented by an agency?

The book was published in November by Bellowing Ark Press in  Shoreline, Washington.  I had worked with editor and publisher, Robert Ward, on my first book and knew that that he worked closely with authors and sought to produce the best book possible.

The cushioned arms of overstuffed chairs

hold us, two old friends, as we sip licorice tea,

steep in the slow burn of fireplace logs.

It is almost quiet. The lowered sun

The Singing Bowls of Tibet hanging

sound in the air.

The meditation garden in the corner

filled with plants and statues of Buddha, is golden

in this late afternoon. We begin to release

what we had held within—the shock of cancer,

a grandson’s death. The shattered sound of letting go.

As we talk, the Laughing Buddha near the door

takes off his dull black coat,

offers us one polished by light.

Option 1:  Use 5 of the 10 words and phrases below from Mary Jo's poem to write a short poem of your own.  You can also use them to write a short essay or story if you would like.  You can change the form of the words if you want to.  Example:  letting go = let go and cushioned = cushion, etc.  Feel free to post your writing in the comments section.

Option 2:  Free-write from Mary Jo's book cover (pictured above) for 5 minutes without stopping.

Posted by Anjie Kokan at 6:46 AM No comments: